Another Day - Another Queen 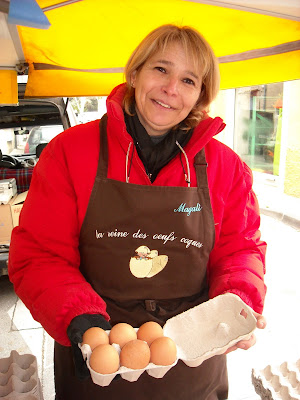 Magali Queen of Eggs
After just having brought Nadira, Queen of Confitures to your attention, just this morning I met yet another Queen at Vaison's famous Provençal market. Magali where I always buy my eggs is now the self proclaimed "Reine des Oeufs Coques" (boiled eggs). That's what her apron says and right she is: her eggs are not only big and organic, they are delicious, too. 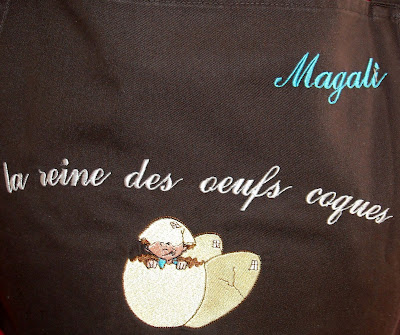 The Queen of Confitures 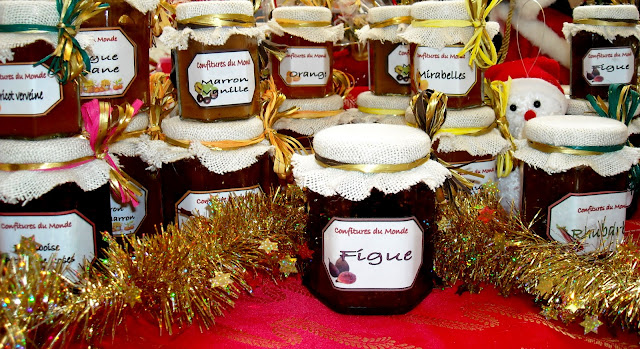 I used to make my own confitures, as they are so prettily called in French - much nicer than jam, don't you think? But not anymore! Now, whenever my OH who's the one who eats all the confiture in this house is running low we go and pay a call to Nadira, the "Queen of Confiture". Although I keep pestering her, Nadira does not yet have a website to order from. So if you want to taste her divine creations keep an open eye when visiting markets in and around Montpellier. Tomorrow she is still to be found at the Christmas Market in Palavas les Flots, next weekend at the Christmas Market in Lattes (11th and 12th of December) and from December 17th to December 19th in La Grande Motte. Believe me - once you've tasted Nadira's pure fig, red fruits, kumquats and ginger or melon and star anise confiture - nothing else will do! 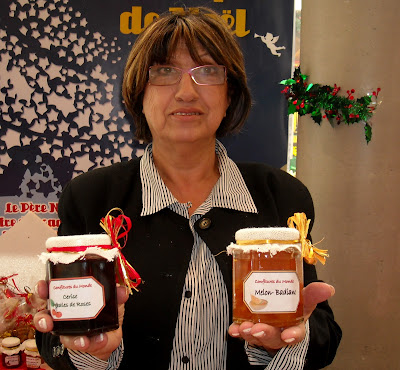 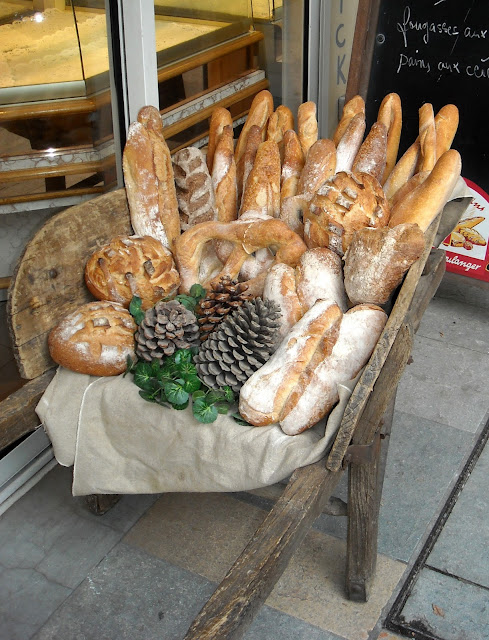 Yesterday I was leaving my friend Thérèse's shop﻿ through the back door into one of the small side streets of Vaison where I'd never paid much attention to the baker who has his shop there. But this time he made me take notice: What a beautiful display of the different varieties of bread he has on offer!
Posted by Cuisine de Provence at 9:39 AM 3 comments: 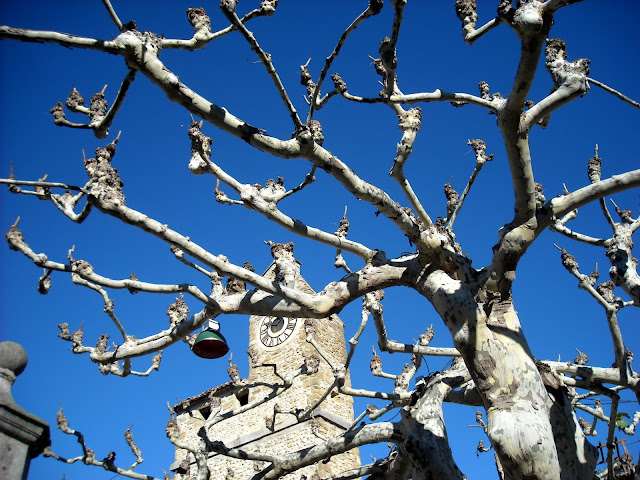 On our way back from the oil mill in Mirabel-aux-Baronnies where we delivered the first big batch of our just harvested olives to be pressed into "the gold of Provence" as our wonderful olive oil is called we stopped for a quick coffee at our much beloved village square in Villedieu. The huge old plane trees had just been pruned and so you can see just how beautiful a day in Provence can be - at the end of November...
﻿
Posted by Cuisine de Provence at 3:14 PM 3 comments:

It's funny, but some of my very best recipes originate from former friends that for various reasons I am not in touch with anymore. Yesterday when I prepared a spinach potato gratin it made me think about the friend from London that I lost because another (very much ex-) friend told her some bad lies. But then again this very much ex-friend gave me the recipe for the best ever beef stew which no matter what I think of her I will never give up making (the fact that the preparation of this stew involves at least half a bottle of brandy does help -there is always a little swig left for the cook).
And yet another long lost friend is the author of a chicken recipe that everybody, but truly everybody loves. And even if sometimes it is sad:  friends may go - but real good recipes are here to stay! 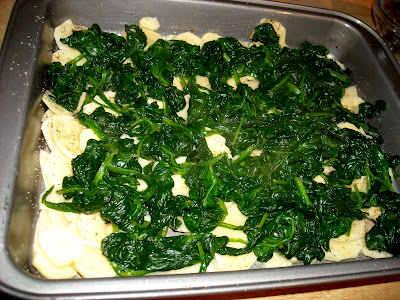 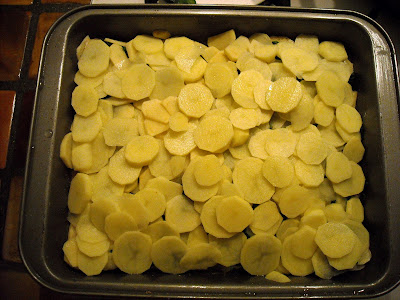 ....and covered by another layer of very finely sliced potatoes 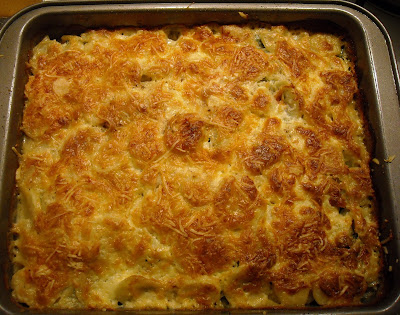 Fresh from the oven: spinach and Potato Gratin 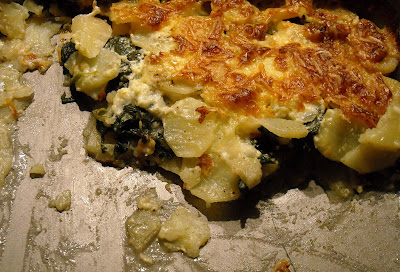 "le beau reste" as the French say
To feed﻿ 4 to 6 people you need:
750 g (1 1/2 lbs) potatoes, peeled and very finely sliced. A big bag (500g/ 1lb) of baby spinach leaves, 1 clove of garlic, 300ml (1 1/2 cups) of crème fraîche (or sour cream or double cream), pepper and nutmeg fresh from the mill and kosher salt. A handful of grated cheese (Gruyère is best).
Butter a gratin dish and cover in one even layer of very finely sliced potatoes. Generously sprinkle with freshly milled pepper and nutmeg and kosher salt.
In a big pan heat a few drops of olive oil add the spinach and let wilt. Discard spinach into a sieve, let cool and press out most of the moisture. Distribute the spinach over the first layer of potaoes, then cover with another layer of sliced potatoes. Season as before - generously please as potatoes "eat" spices - i.e. need rather a lot of them. Very finely mince (or press) one clove of garlic and stir into the crème fraîche, sour cream or double cream, dilute with a little bit of milk if necessary to give the cream pouring consistency. Pour over the spinach-potato gratin, sprinkle with a generous handful of grated cheese and let bake in a preheated oven at 180°C/350°F for 40 to 45 minutes. I like to serve this alongside smoked or poached salmon.
Posted by Cuisine de Provence at 5:01 PM 4 comments: 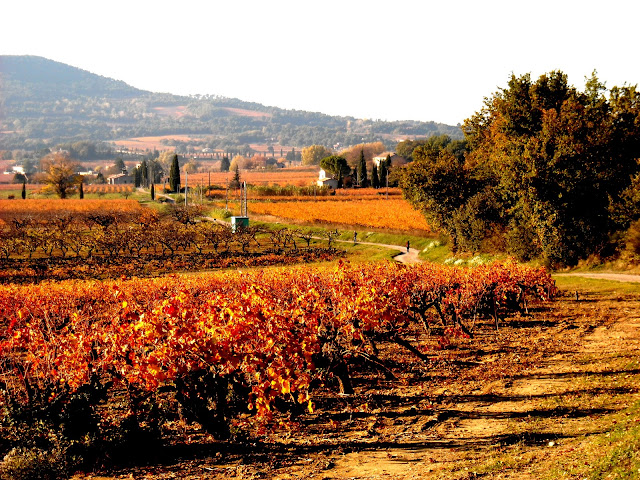 ﻿It has already been snowing on Mont Ventoux and it won't be long before the skiing season will be under way but for the moment we are basking in glorious sunshine (20°C/68°F this afternoon) and admire the beautiful autumn colors of the vineyards - Indian Summer in Provence! 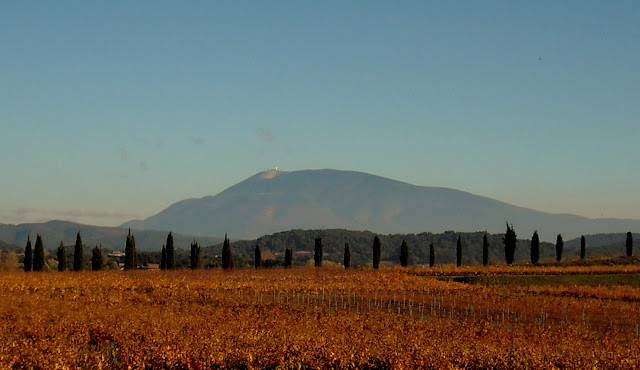