"Le Météo" as the weather forecast is called in France gave us a rather stern warning yesterday: Thunderstorms and torrential rains was what they promised us for today and guess what we woke up to? Torrential rains and thunderstorms. Good thing that for once I believed what was said and harvested the last of our figs. I don't think we ever had such good and many figs as this year. We have been eating them straight from the tree, on fig tarts and I must have about 15 pots of fig jam stashed away in a corner of the wine cellar. This time I tried my hand at something I'd never done before - fig chutney to go with foie gras. 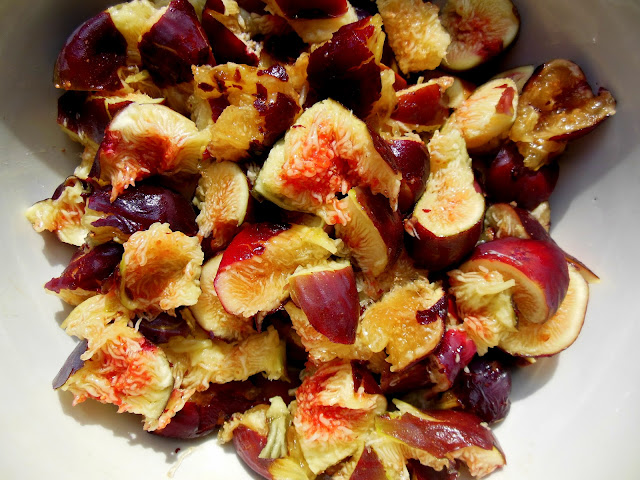 The last figs of the season
The inspiration to this was my friend Theda who told me about a recipe one of her friends had given her and which she generously shared with me. Not entirely happy I searched the Internet for alternatives and ended up combining Theda's friends' recipe with one I found on chefkoch.de .
Having two ingredients missing and doing this on a Sunday (where shops around here are only open until noon) meant that I had to wait until the rain this morning subsided to go and get fresh ginger and raisins.
So I already cut up my kilo and a bit (1200 g) of figs, added 150g red pepper, cut into very small cubes,  one finely chopped white onion (150g), 150 g chopped prunes, 1 tsp salt, 1 tsp cayenne pepper, 400 g brown sugar and stirred it all together with 3/4 cup of red wine vinegar plus 3/4 cup of red wine. All this was left to macerate overnight. 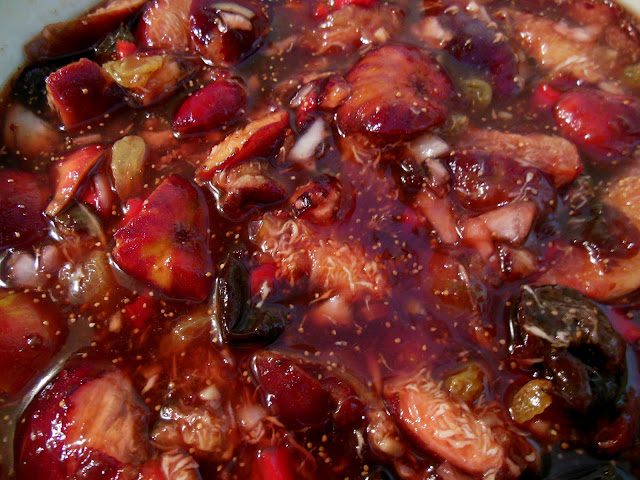 Left to macerate overnight - Figs, prunes, red wine, brown sugar, spices and red wine vinegar
This morning I added a walnut sized piece of very finely chopped ginger and 120 g of raisins, brought the mixture to the boil and over moderate heat and frequently stirring let it patiently simmer until most of the moisture was evaporated. This took about 90 minutes before I could fill my newly acquired jam pots. Which made me laugh. Because even on jam pots the Academie Française reigns supreme! See, whenever a foreign word is used in France the Academie Française, a very honorable institution that was founded in 1635 makes sure there is an astrisk added and the word translated. So zealously the Academie guards French against foreign influence that French radio stations are not allowed to play more that 30 per cent foreign music and "homemade" on the lids of my jam pots had an asterisk added and the translation "Fait Maison" on the side of the lid. Politically correct Fig Chutney..... 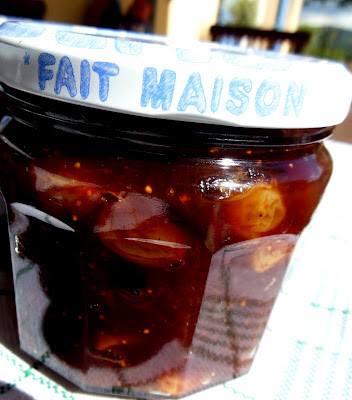 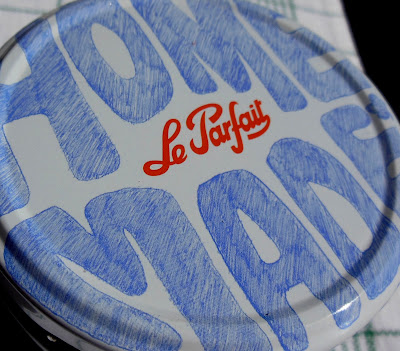 Home made of course

Until recently chickpeas to me were synonymous with houmous. Until I met "le Roi des Pois Chiches"  and then tried and tried again to recreate his wonderful chickpea dip that is so different to houmous but just as addictive. Finally I now think I've got it licked: Poichichade à la Provençale! 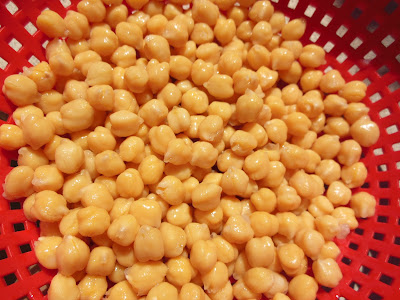 You can of course start by soaking dried chickpeas overnight but as I always think that life is short enough I simply start but unscrewing a jar of chickpeas and then - and this is important - rinse them thoroughly under cold water. Into a food processor they go together with 3 peeled and crushed garlic cloves, the juice of half a lemon, a good splash of olive oil, a good pinch or two of powdered cumin and sweet paprika powder. Then it is pulse and scrape down, pulse and scrape etc. so all ingredients get nicely crushed and mixed. To get a real nice smooth consistency and round the taste I then add some highly concentrated chicken stock. Pulse again and let the mixture "sit" for at least an hour for the flavors to come together. Serve sprinkled with some sesame seeds. To be eaten as a dip with vegetable sticks or on crackers. 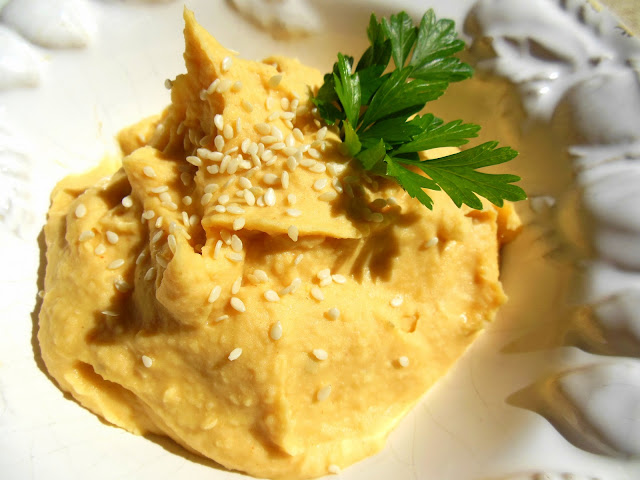 It's a Dog's life: Public Transport in Provence 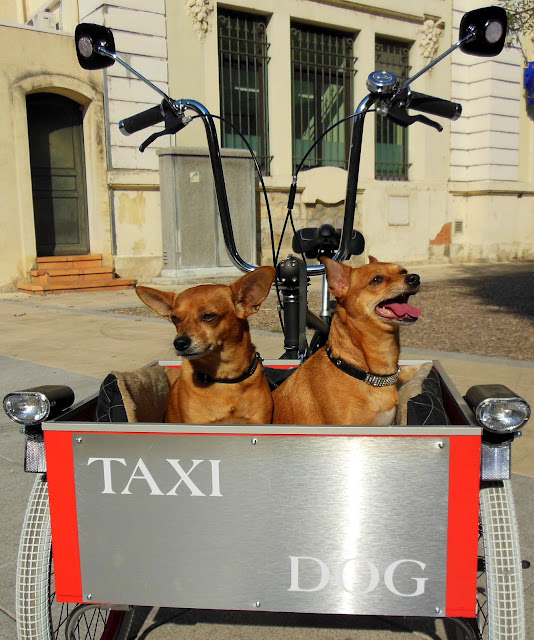 Public transport in Provence is hard to come by. From Vaison there is a bus in the morning to Orange and Avignon that takes forever because it stops at every little village along the way and that is about it. I always warn over optimistic tourists to better rent a car if they want to explore Provence. So you can imagine my enchantment when I went to the farmer's market this morning and saw that things are getting better - at least for dogs, that is.....
Posted by Cuisine de Provence at 4:39 PM 6 comments:

Roasting Garlic in the Microwave 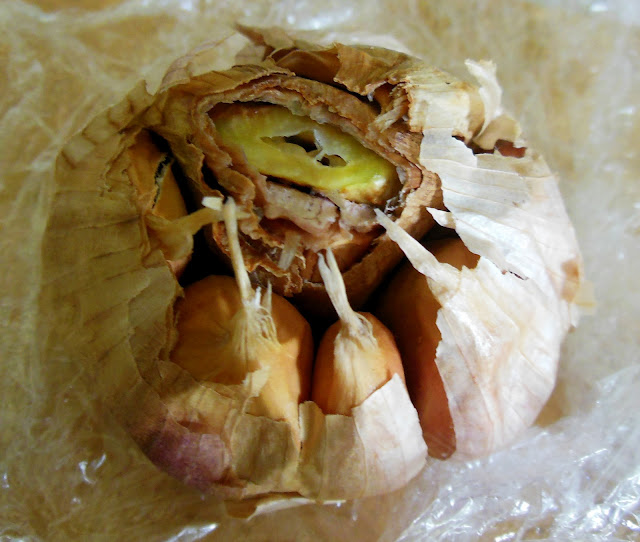 Having bought a huge bunch of garlic at the Garlic Festival in Piolenc I  now tend to use these deliciously pungent bulbs even more generously than I normally do. For tonight I have a Côte de Boeuf, panroasted cherry tomatoes and potatoe & garlic mash on the menu. For this absolutely divine mash the garlic has to be roasted. But to turn on the oven for at least half an hour to roast a single bulb of garlic? I don't think so. Plus it so happens I have just read an article by the three starred Michelin chef  Heston Blumenthal on microwave cooking. If he can cook fennel in the microwave I can roast garlic, right? So I wrapped the bulb tighly in plastic wrap, gave it 3 minutes full power -  eh voilà - perfectly "roasted" soft garlic to be squeezed out of its skin into the steamed potaoes to be then happily mashed up with some of our very best olive oil, kosher salt and freshly ground pepper. Can't wait....
Posted by Cuisine de Provence at 3:17 PM 8 comments: